Located on the far south side of Chicago, along the Illinois-Indiana state line, the 631-acre William W. Powers State Recreation Area (SRA) typically attracts anglers and waterfowl hunters utilizing Wolf Lake, and it is a destination for family outings and picnics. But history was made in the fall of 2022 when the site hosted an archery deer hunting program—resulting in the first white-tailed deer harvested in Chicago in more than 150 years.

Nicky Strahl, a biologist with the Illinois Department of Natural Resources (IDNR) serving as both the northern Illinois Hunter Heritage Biologist and District Wildlife Biologist for Cook and DuPage counties, developed the lottery-based archery deer hunt to take place on 26 acres within the IDNR site.

“The decision to implement an archery deer hunt was little bit of a perfect storm,” Strahl explained. “Biologically, we need to do all we can to halt the spread of Chronic Wasting Disease (CWD), the always-fatal neurological disease which has been documented in some Cook County deer.”

From a law enforcement standpoint, having hunters on the site provides extra eyes-on-the-ground to help address reports of deer poaching received each year from Conservation Police Officers and Cook County Forest Preserve personnel.

“And, as the Illinois Learn to Hunt program has demonstrated, hunters are interested in finding sustainable and ethical meat sources that are close to home so they can provide healthy meats for their family,” Strahl noted. “This hunt offered the chance for a few Chicago area hunters to put venison on their family table without traveling far or being gone for an extended period of time.”

The William A. Powers SRA archery hunt was a lottery system similar to other hunting programs operated by IDNR.

“Thirty-seven applicants applied for the opportunity to hunt one of seven two-week periods or a final one-week hunt,” Strahl said. “Only one hunter was present on the site for any given time frame.”

Jose Guzman drew the first slot, harvesting a doe that was 5 years old or older at the end of his October 1-14 hunting window. Following on his heels for the second two-week session was John Phillips, who harvested a 3-year-old doe.

Strahl noted that while at William A. Powers SRA, both Guzman and Phillips observed a maternal herd with at least five does, as well as two or three bucks. While either sex may be harvested during the William A. Powers SRA archery hunt, during the early segments of the 2022 deer season both gentlemen were presented only with clear, ethical shots for does.

Guzman has had a life-long interest in hunting but only within the past five years has his deer hunting interest become serious.

“My mother tells stories about my father hunting when he was younger, but he became ill and I never had the opportunity to enjoy this father-son experience,” Guzman explained. “Deer hunting was always in the back of my mind to try. It became a reality when a friend from my fishing club offered to mentor me.”

“Being drawn to hunt the first modern-day Chicago deer hunt—let alone getting the coveted spot as the first hunter—was an honor,” Guzman said. “I also felt a duty to set the tone for the program and hunters who would follow me. I worked to be respectful to the resources and to area residents.” 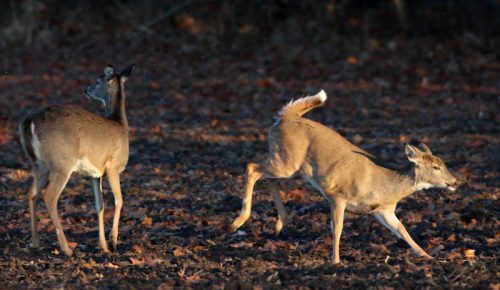 If you are interested in any form of hunting, the Hunt Planner box at Hunt Illinois is an excellent tool. That site contains specific information on hunting William A. Powers State Recreation Area.

“I thank Nicky Strahl who was the principal architect for this historic hunt,” Guzman continued. “This program is an example of how an ethical and safe archery deer hunt can occur within a metropolitan area, and allow sportsmen and women to have an active a role in the management of CWD.”

Strahl is trying to increase awareness of the benefits of hunting within the Chicagoland area and offered one final message regarding the management of game species in municipal areas: Hunting within highly populated areas can be a safe and ethical means to allow humans to co-exist with healthy wildlife populations.

Testing has now confirmed that CWD prions were not detected in Guzman’s deer. He and his family will happily be enjoying the fruits of his labor.