Photo courtesy of the Illinois Department of Natural Resources.

The New Science of Bird Migration

Every fall our eyes are drawn skyward by the honking of migrating geese flying in their characteristic V-formation. Yet beyond what we can see and hear – and mostly under the cover of night – millions of birds are passing overhead this time of year.

With winter pressing closer and food supplies dwindling on their breeding grounds in the Arctic north, over 350 species of birds in North America are migrating south toward their winter grounds. Some will travel short distances from their summer homes; others will fly thousands of miles to overwinter in the southern United States and in Central and South America.

Until recently, researchers have had an incomplete picture of bird migration, and for good reason: most migrators fly at night when they are not readily observed; many cover thousands of miles requiring pursuit across long distances; some birds must be captured – and then recaptured – to attach and retrieve tracking devices.

But with enhancements in technology and the help of community and citizen scientists, investigators are discovering exciting new details about bird migration. Here’s a sample of what they’re learning.

Due to the work of researchers and community volunteers, the science of bird migration is enjoying a resurgence that amazes even the casual birdwatcher. Flying overhead is one of nature’s most colossal spectacles: millions of birds, some weighing less than a quarter, engaged in an ancient ritual that we’re only beginning to understand. Remarkably, they will repeat their journeys when spring urges them to return to their ancestral breeding grounds to raise another generation of migrating birds. And once again, our eyes will be drawn skyward—with renewed wonder.

Thanks to Dr. Michael Ward, a professor in the Department of Natural Resources and Environmental Sciences and ornithologist with the Illinois Natural History Survey at the University of Illinois at Urbana-Champaign. As a specialist in the ecology and behavior of birds, his expertise was valuable in writing this article. 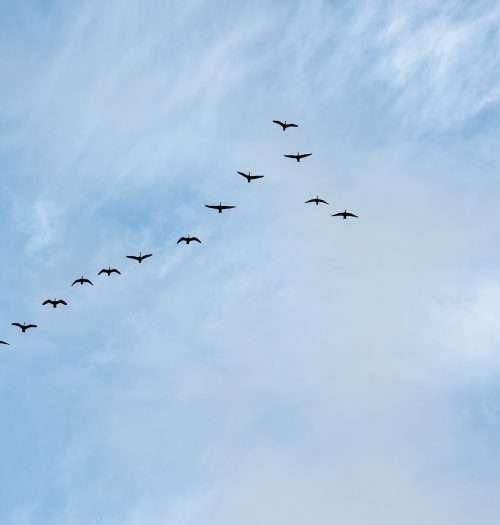 Want to know how many birds flew over your house last night? Are you interested in tracking migrating birds in flight? Check out these incredible free resources.

Carla Rich Montez is an Illinois Master Naturalist volunteering as a writer for Outdoor Illinois Journal. While she was writing this article in August and September, over 60 million migrating birds crossed over her Illinois county.